I’m really excited about our project for next Tuesday. A guy has asked us to make the words, “Marry Me” in red roses, so he can bring his girlfriend to the shop & propose to her. He had envisaged the letters concealed  by petals, which would then be blown away by a fan.

We gave it some thought and suggested to him that we should use the shop window, & suspend the letters. It will be like a piece of performance art. There will be material covering the glass , and just at the right moment, it will drop down & the words will be revealed! Very romantic! 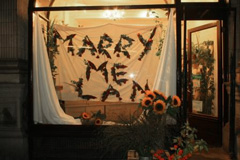 The answer was “Yes”. 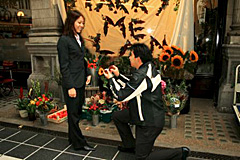 I’m in the process of drying the red roses, & will make a bouquet with some of them. The rest will be kept in petal form, & both will be put into display boxes.